Getty Images recently announced that 35 million of their highly acclaimed images would be available for "free" embedding... the only problem is that the actual implementation doesn't allow social sharing - a major requirement for most people using images today. I wrote more about this on my Disruptive Conversations blog at: http://www.disruptiveconversations.com/2014/03/one-screenshot-to-show-how-getty-images-free-offer-fails-and-why-i-will-not-use-it.html

Much has been made over the past few weeks about Getty Images allowing the free embedding of over 35 million images from Getty's vast library. The Verge ran a glowing piece and Neville Hobson summarized a good bit of the early coverage. While I commend Getty Images on trying to evolve their business model in the era of the Internet, here's the reality:

I will NOT use this service - and I can't imagine why anyone else would who wants their content found via social networks.

Here is one screenshot to show why Getty Image's service fails.. I used a Getty Images embed in my last post here and this is what happened when I tried to share the link on Facebook: 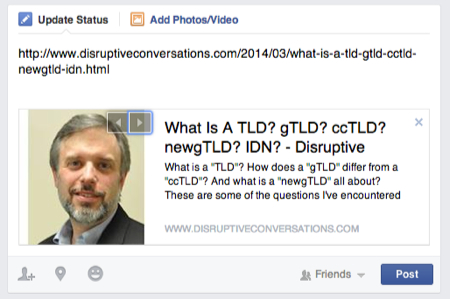 Here's a second screenshot of sharing the post out in Google+: 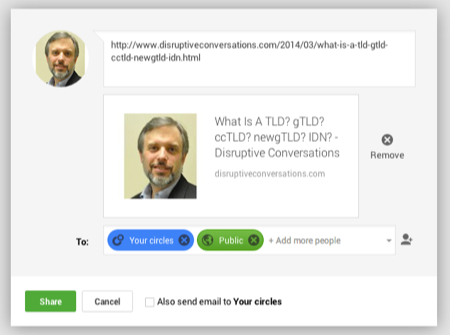 Do you see the problem?

WHERE IS THE IMAGE FROM GETTY IMAGES???

The image appears in the post itself, of course, but it doesn't appear when you try to share the image out in social networks.

Which is... often... THE ENTIRE POINT of why I am including an image in a blog post. I want something visual that will illustrate the points I'm making in the post - but also that will be attractive when the post is shared out on social media.

So for me this is a reason why I will pretty much never use this new offer from Getty Images.

There are host of other issues, as well, as outlined by Brian Krogsgard in a recent post, but for me the one that kills the whole deal is the lack of the ability for the image to appear in social sharing.

Again, I commend Getty Images on trying to figure out how to evolve their business in the Internet age, but this implementation needs to evolve before it will be useful for people like me.

What do you think? Are you planning to use this new service?

I recorded an audio commentary on this issue as well:

What Is A TLD? gTLD? ccTLD? newgTLD? IDN?

What is a "TLD"? How does a "gTLD" differ from a "ccTLD"? And what is a "newgTLD" all about? These are some of the questions I've encountered as I've been talking to people both in person and via the FIR podcast about the "newgTLD" program that is bringing hundreds of new top-level domains into the domain name system (DNS). To have an article I can point to, here are the basic things you need to know (and ICANN regulars will realize I am glossing over some of the nuances... but I'm trying to provide a simple view):

Whenever you use a domain name, in a web address(URL), email address, or wherever, it ends in a "top-level domain" or "TLD". This is the last part of the name. We often thing of .COM, .ORG, .NET, etc., as in:

(I've capitalized and made the TLDs bold here, but in the DNS case doesn't matter.)

The entity responsible for the administration of these TLDs in the "root" of the Domain Name System (DNS) is the Internet Assigned Numbers Authority (IANA) that is currently operated by the Internet Corporation for Assigned Names and Numbers (ICANN). You can see the full list of current TLDs at:

The next part of the domain name to the left of the TLD (and separated by a dot) is the "second-level domain". These are the domains that you are typically able to register with a registrar. Examples include:

The next part of the domain name to the left ("www" in the first two examples above) would be called the "third-level domain", and so on.

Generic top-level domains (gTLDs) are TLDs that are not tied to any specific country and are "generic" in terms of being able to be used (in theory, anyway) by anyone on the Internet anywhere in the world. The "original" TLDs such as .COM, .ORG, .NET, .GOV, .MIL are all classifed as "generic TLDs"[1]. There were a couple of rounds of "expansion" of the gTLDs that brought the total to 22 gTLDs prior to the "newgTLD" expansion currently underway

Country code top-level domains(ccTLDs) are two letter TLDs that are assigned to countries based mostly on the ISOC 3166 list of country codes. Some countries have chosen to operate their ccTLD exclusively for domains within their country or geographic territory. Some do not allow people to register "second-level domains" under the TLD and instead require people to register third-level domains under one of several different second-level domains. For example, the .UK domain as to date required registrations to be under domains such as ".co.uk" and ".org.uk", basically duplicating part of the original gTLD scheme inside their ccTLD.

Many ccTLDs have chosen NOT to restrict their ccTLD to people in their country and have in fact marketed their domains very widely encouraging everyone to use them. Some prominent examples of this include Columbia(.CO), Montenegro(.ME), Tuvulu(.TV), Federated States of Micronesia(.FM) and many more.

Essentially, any time you are using a two-letter TLD, it is a ccTLD for some country. (With a few exceptions.)

After many years of discussion, ICANN's board voted in 2011 to allow the creation of new generic TLDs using almost any text string (and in multiple character sets) and began the "newgTLD" program. This resulted in 1,930 applications by various companies to operate new gTLDs. These newgTLDs are now being rolled out in phases and people are able to register second-level domains under many of these domains. More newgTLDs are being made available pretty much every week - and the expansion will continue for many months and years ahead of us. I recently wrote on CircleID about how to keep track of all the newgTLDs.

At a technical level, "new gTLDs" are effectively the same as "gTLDs"... the designation is just really that these new gTLDs are coming out in this current round of expansion.

The original TLDs were all in the ASCII character set, but over time ICANN decided to allow the creation of "internationalized domain names"(IDNs) that use other character sets such as Cyrillic, Arabic, Chinese, Korean, etc. The first IDN for a country code TLD appeared in 2010 and the newgTLDs contain many IDNs. (In fact, the very first of the "newgTLDs" were four IDNs.)

These are the basic terms you will hear for domain names when you are talking about the newgTLD program. There are a host of other issues, topics and discussion points that can be discussed in future posts... but I wanted to get these basic terms out there as a baseline.

Comments are, of course, welcome.