TDYR 278 – An Example Of My Weekly FIR Podcast Reports

For the past 10 years I have contributed a weekly report into the "For Immediate Release" podcast (a.k.a. "FIR") focusing on technology and PR / social media. In this TDYR episode, I provide some context and then include the 6-minute report I contributed to FIR episode #14 - http://firpodcastnetwork.com/fir-14-where-does-employee-news-belong/ If you are interested in listening to more of the great series of FIR podcasts, visit http://firpodcastnetwork.com/ 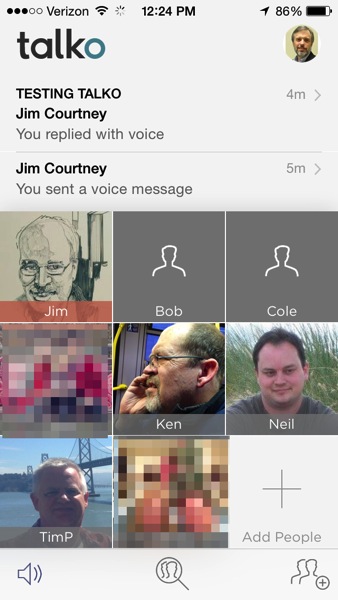 Today Microsoft announced that they acquired the technology of Talko, a communication app created by Ray Ozzie and launched back in September 2014. Fortune has an article on the acquistion, as do a good number of other media sites.

After Talko first launched, I wrote about my initial experience - and the problem I had of Talko working through my home firewall. But I was intrigued by the possibilities laid out in a Medium article about how Talko could change communication and integrate voice, chat and messaging in interesting ways.

The reality, though, was that Talko was a classic case of suffering from the Directory Dilemma - as I said in that article:

People will only USE a communication application if the people they want to talk to are using the application.

The people with whom I communicate were not regularly using Talko.

You can see the recognition of this dilemma in today's front page of Talko's web site:

However, as engaged as many of you have been, the reality is that the broad-based success of communications apps tends to be binary: A small number of apps earn and achieve great viral growth, while most fall into some stable niche.

For all the value and enjoyment it's delivered, and for all the team's listening and perseverance, Talko was largely on the path to filling a (passionate) niche. We're in this to have great impact, so it's time for a change.

We deeply appreciate the commitment that so many of you made in betting on Talko. You invested your time and your reputation to convince your friends and co-workers to use the product with you.

This is the reality that messaging / communication apps have to face today. Either somehow build that massive directory - or be happy (and financially stable) within the certain niches and communities in which your product can thrive.

What's next for the Talko team (minus Ray Ozzie, who has said he will not be re-joining Microsoft) isn't 100% clear. Both the Microsoft and Talko posts today are vague, with the latter saying:

As part of the Skype team, we'll leverage Talko’s technology and the many things we’ve learned during its design and development. We'll strive to deliver the best of our product’s innovations far more broadly than on our current path.

Looking forward, we hope to hear from you again as we find ways to deliver the best of Talko in Skype.

We'll have to see what pieces of Talko they bring into Skype.

Congrats to Ray Ozzie and the Talko team - and to Microsoft - on this acquisition. I hope it does work well for all involved.

Meanwhile, we can look and wonder which of the zillion new messaging apps out there will be the next to fold into a larger player...

P.S. There's a thread on Hacker News about today's announcement and there was a really long thread on HN back in 2014 when Talko was announced that may still be of interest.

Are you passionate about preserving the global, open Internet? Do you want to help guide work to connect the unconnected and promote / restore trust in the Internet? Do you have experience in Internet standards, development or public policy? If so, please consider applying for one of the open seats on the Internet Society Board of Trustees. The Internet Society serves a pivotal role in the world as a leader on Internet policy, technical, economic, and social matters, and as the organizational home of the Internet Engineering Task Force (IETF). More...

On this second day of the 10-year Review of the World Summit on the Information Society (a.k.a "WSIS+10") at the United Nations Headquarters in New York our focus is on the main plenary session where our President and CEO, Kathy Brown, will be one of only 10 speakers from non-governmental organizations (NGOs), civil society and industry to address the UN General Assembly (UNGA).  Here's what the day looks like:

At some point today, Kathy will be addressing the UNGA. We don't know precisely when, though. She is the 82nd speaker on the list of speakers and we anticipate it will be sometime between 3 and 4 pm New York time (UTC-5).  You can watch all of the sessions on "UN Web TV" at:

ISOC At WSIS+10, Day 1: Women’s Empowerment and Building on WSIS+10

Today marks the official start of the 10-year Review of the World Summit on the Information Society (a.k.a "WSIS+10") here in New York at the United Nations Headquarters. All year long our policy activities have been building toward this event, and as our President and CEO Kathy Brown wrote yesterday, we are encouraged by the "outcome document" and are looking forward to the discussions this week - and to translating the statements into actions in the months and years ahead.

For Immediate Release #13: The Robots are Coming

In today’s episode, we covered these topics:

Paul Gillin writes, speaks, and trains marketers and corporate executives to think like publishers as part of Profitecture. He specializes in social media for B2B companies – in fact, he co-wrote Social Marketing to the Business Customer with Eric Schwartzman (who was an FIR panelist last week) and currently co-hosts FIR B2B with Eric. Paul has written four other books, including Attack of the Customers, his most recent book. He co-authored The Joy of Geocaching with his wife, Dana. Before striking out on his own, Paul worked for TechTarget and, before that, was editor-in-chief and executive editor of Computerworld Magazine.

Phil Gomes is senior vice president at Edelman, working in U.S. B2B Digital, advanced community engagement and special situations, a role he developed that focuses on preparing clients for advanced issues and special situations regarding online corporate reputation and emerging technologies. Phil has been with Edelman since 2005; before that he was with Dryden Marketing Group working as a media programs manager. Phil co-founded CREWE – Corporate Representatives for Ethical Wikipedia Engagement, and he’s a founding fellow of the Society for New Communications Research. Phil was a recent FIR Interviews guest talking about blockchains and their potential role in communications, a topic that will come up again in today’s show.

Heidi Miller is Chief Conversation Officer at Spoken Communications, a provider of a Contact Center as a Service cloud platform. Heidi is a Content marketing specialist who helps organizations achieve strategized communication and marketing goals by engaging online and offline communities. She is a frequent speaker and is the author of the blog, Talk It Up. Heidi is also a very early podcaster, hosting Diary of a Shameless Self Promoter back in the earliest days of podcasting.

The post FIR #13: The robots are coming appeared first on FIR Podcast Network.

For Immediate Release #12: Is PR a bad word?

In today’s episode, we covered these topics:

Connect with this week’s panelists on twitter at @dbreakenridge, @jangles, and @ericschwartzman.

Deirdre Breakridge has been in PR and marketing for more than 25 years helping senior executives in mid-to-large organizations communicate to their stakeholders. She’s currently CEO of Pure Performance Communications, which she started in 2011. Pure Performance specializes in integrated marketing strategy, training, and workshops. Before that, she was president of Mangol Marketing, and was an adjunct professor at NYU. She co-authored Putting the Public Back in Public Relations with Brian Solis – and appeared with Brian in an FIR interview about the book back in 2009. She also wrote Social Media and Public Relations: Eight New Practices for the PR Professional.

Neville Hobson co-hosted this show for 10 years and 8 months, up just a few months ago. Neville is based in Bracknell, outside of London in England where he analyzes trends, behaviors and practices in digital communication. As an independent consultant for the last 11 years, he’s focused on social business, the collaborative economy, wearable technologies, and the professionalism of PR. He also held a position with WCG as head of social media for Europe, and was VP of Corporate Communication for Scala Business Solutions in Amsterdam.

Eric Schwartzman is the co-host of FIR B2B here on the FIR Podcast Network. He was the host of a terrific early-days podcast called On the Record Online – Neville and I were both religious listeners — and he was a regular contributor of reports to FIR. When we first met, Eric was director of Promotions for Rogers & Cowan, a Hollywood-focused agency. He went on to found iPressroom, one of the early online newsroom offerings, and currently is running ComplySocially, which offers a library of self-paced elarning courses to help organizations manage online employee advocacy campaigns and ecommerce functionality.