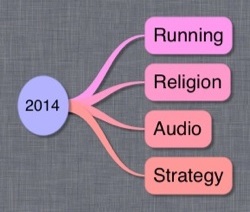 The good news is that I did make running more a regular part of my life. By adding up the monthly totals in my iPhone app I see that I ran over 288 miles this year. It was spotty, though. I only ran 6.2 miles in September yet I ran over 56 miles in July! I finished the year doing 26 miles in December... which works out to be about 6 miles a week. Good... but not great. Next year I'll aim to do better.

It was also a strange year in that I ran only one race... and that was the short 1-mile "Pumpkin Mile" that was part of the Keene Pumpkin Festival and that I ran with my five-year-old daughter. For all the other races I wanted to do I either had a schedule conflict or in one case it rained harder than I really cared to race in.

My goal starting off 2014, though, was to get running more a part of my life... and I think I can safely say that I did that.

Back at the beginning of the year I wrote:

This has been hard for me, but I have started to be more open about this side of myself. For instance, I participated in a panel that was recorded on video distributed on YouTube where I talked about our church and my involvement in the "community breakfasts" that we do for the homeless each morning during the winter months. I also shared on Facebook and social networks when I was giving a sermon at our church in late October on the subject of "Facebook and Fox News: Escaping the Echo Chambers of Affirmation". I actually recorded that sermon but have yet to put it online... perhaps in 2015.

I also shared out more links from our church's web site and social media feeds into my own feeds... which was a big step for me.

Baby steps... but at least I'm no longer hiding my this part of me. We'll see where this goes from here.

Unfortunately this area remained a bit of an "aspiration" this year. I had hoped to do more with audio this year. Now I did do more with my "The Dan York Report (TDYR)" podcast... producing over 155 of the short episodes. I also didn't miss a single week of For Immediate Release (FIR) reports, producing 52 of those reports. I also started using several new applications on my iPhone to more rapidly produce podcasts

... I'd had aspirations to do more. Here's how I wound up with what I had hoped to do:

We'll see if this gets better in 2015. I thoroughly enjoy audio and would like to get back to doing more!

I wrote in January:

So there I was for 2014... good progress with two of my words... less so with the other two. How did your year work out? Did you get stuck working on New Year’s Eve? Did you draw the short straw and now you’re sitting there at work while others are off on vacation?  If you’re looking for something to do, why not read the recent RFC 7381, Enterprise IPv6 Deployment Guidelines?  It will help you get an idea of just what your company or organization might want to do do make the move to IPv6 in 2015!

And then head on over to our IPv6 page for enterprises and organizations and find all the other resources we have available to help you learn more about moving to IPv6. 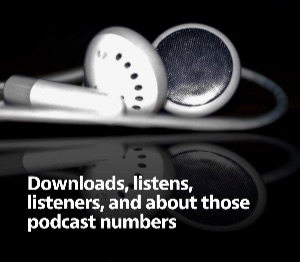 What do the number of podcast downloads, listens and listeners really mean? Which statistics can you really believe? And what do they mean?

Back on December 12, Pete Davis published a great article on Medium titled "Downloads, listens, listeners, and about those podcast numbers" that dives into all these different stats. Davies was reacting to the hype over the podcast "Serial" and wanting to make sure people understood some of the nuances of how you can measure podcasts.

As he points out, the number of people downloading an episode can be very different from the total number of downloaded episodes. One person, who we will call a "downloader" might download many different episodes. As he notes, people might have different devices or podcast apps that all pull down episodes.

And the number of downloads is VERY different from the actual number of listens that occur. I can personally attest to this - my apps download many different episodes of podcasts... but I only listen to a few of them. The others have been downloaded but will probably never be listened to.

The challenge is that finding out if people have actually listened to a podcast is extremely hard. As Davies writes:

Nobody really knows exactly how many people are listening to podcasts.

All we can do is make guesses... or use imperfect numbers like downloads to make some kind of estimate of the popularity of a show.

It's a good article... and as he concludes, we do need better data around all of this. I also definitely agree with his conclusion that a large part of the success of "Serial" and "Startup" is that they offer compelling content! It happens to be in audio form... but the content and storytelling expertise is what draws people to these podcasts.

"Hey, that's a Mitel IP phone... I remember when that handset was introduced. It was very different from the previous one but had better 'shoulderability' ... it created a bit of a stir among customers, though. Hmmm... I wonder what model IP phone that is......"

All of this was running through my head during a routine visit to my bank this morning while waiting at a counter talking to someone. He had to call another office so there I was looking at his desk phone.

It happens to me all the time!

I guess it's just an occupational hazard of having been a product manager for IP phones during my time at Mitel... or maybe just the 6 years I spent there learning about IP telephony... but I just always see the IP phones. :-) 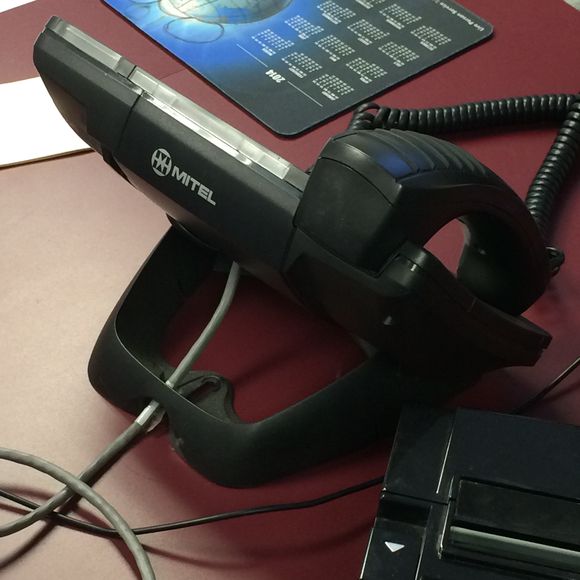 TDYR 208 - The Single Greatest Feature I Use On My iPhone Is... by Dan York

Which network security penetration testing tools support IPv6?  What caveats should you know about the ones that do support IPv6?

Recently the team as security firm ERNW published their December 2014 newsletter with the headline “Penetration Testing Tools that (do not) Support IPv6” where they took a lengthy tour through a wide range of security tools to assess their IPv6 readiness.  As they say in their introduction, their goals were to:

They specifically only tested open source or free versions of commercial tools and did not test IPv6-specific tools.  They were seeking to understand which of the commonly available current (IPv4) test tools also worked well with IPv6.

The bulk of the document (pages 9-51) consists of walk-throughs of exploration of each of the various tools in different categories.  They examine the tool, provide screenshots in many cases and then state a conclusion about how well or not the tool supports IPv6.

What I personally found most useful was section 15, the Appendix, starting on page 56 that provided a table view with a list of all the tools tested and a quick summary of how well (or not) the tool supported IPv6.

If you are interested in security testing and specifically for IPv6 networks, this document is definitely worth a read!

And if you are new to IPv6 and want to learn more, please visit our Start Here page to find resources targeted at your role or type of organization.