If you haven't looked at your Google+ profile or page for a bit... you might want to do so because Google has changed the image size again. It used to be a huge image that took up a great amount of your screen - and then "collapsed" in a funky way when you scrolled down the page. Your name and your profile photo appeared at the bottom of the photo and the photo was greyed out a bit.

Now your photo is a good bit smaller and does not collapse as the page scrolls... it just disappears off the page as you would expect it to. Most significantly, though, your profile photo and info is on the left side of the photo, taking over about a quarter of the image. Here's what my Google+ page looks like now: 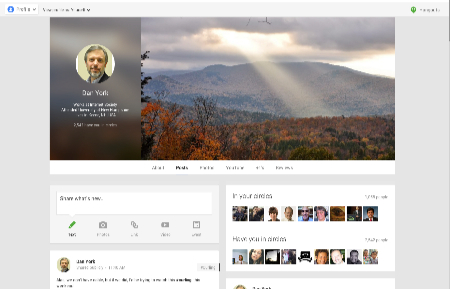 You'll note that the profile photo and info now blurs the image behind them. But... if you had taken the time to create a cover photo with something centered in the middle of the photo, you'll probably want to adjust that to shift the image over a bit.

I've not seen any formal specifications out of anyone at Google about this new image size. The only real note I've seen is this Google+ post by Google engineer Karthik Nagaraj just indicating the change was happening. He indicates that basically any 16:9 image should work.

On my Mac using Google Chrome I did a screen capture of that part a G+ page and that told me that the overall image was 1060x438 and the main visible (non-blurred) part was 780x438 (which math then says leaves 280x438 behind the blurred part. That, however, is just how it was displayed in Chrome on my Mac... I don't precisely how it will appear on other browsers on other operating systems.

The main point is that about the leftmost 25% (actually 26.4% if those numbers I measured) of the image will be blurred, so keep that in mind when choosing an image.

Given that I find myself using Google+ a good bit more these days, I do like these changes... it just would have been great if Google gave all of us a bit more of a clue about the change rather than just waking up to find that it had been done. Ah, well... given how much I've paid for Google+ (i.e. nothing) I guess I can't really complain, eh?

What do you think of the new cover photo size? Do you like this better? 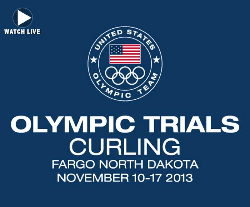 Want to watch some amazing curling on TV?  The US Olympic Curling Trials are happening today and this weekend in Fargo, North Dakota. They will be live on the NBC Sports Network channel.  The schedule of games seems to be this:

P.S. And yes, the only coverage now is on NBC Sports Network.  There was a free live stream on the web but that was for all the games up until the playoffs.