As Of April 15, Yammer Will Be Effectively Dead To Me

Sadly, as of tomorrow, April 15, 2014, Microsoft's Yammer service will be effectively dead to me. For that is the day when the Yammer desktop client dies:

This app is out of date and will be discontinued on Apr 15, 2014. For the best Yammer experience, please use your web browser.

Except, of course, that the web browser isn't the "best" Yammer experience for me.

This change was first announced earlier this year with a brief statement on Office365 site that had this as an answer for "why?":

As noted by multiple people in the comments to that page, I'm not sure who Microsoft asked, but for many of us the desktop app was the way we preferred to post and share content.

Microsoft notes that they offer a "Desktop Notifier" app for Yammer, which they do, but it has one wee little problem: 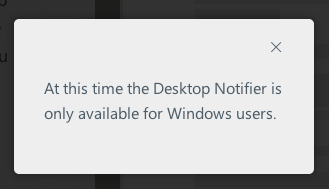 Yep, it's only for Windows. I'm a Mac user. They apparently don't care about me.

That app also seems to only generate notifications... not let you actually interact with the Yammer feed. It is very definitely NOT a "replacement". As stated in one of the community support threads on Microsoft's site by a user named Rob Sparre:

A decision has already been made by MSFT to kill the nice streamlined and useful Yammer desktop app and replace it with the horrible desktop notifier and force us to keep a web browser open with a busy and bulky screen layout. It is disappointing to lose the nice app and have to use a big fat confusing web page.

You may as well close this thread as I do not foresee any good news about it in the future.

Even if I had the new "app" on my Mac, my only choice now is to use the web interface to interact with Yammer.

The problem with using a web interface is that at any given moment I've typically got 57 zillion web browser windows and tabs open on my system and... somewhere ... buried in all those windows and tabs is going to be Yammer.

Yammer is already "yet-another-place-to-check" that isn't fully part of my workflow, and so I don't check it all that much... but having the separate desktop application provided several benefits on my Mac:

1. A SEPARATE APP I COULD SWITCH TO - If I ever wanted to see what was being posted in Yammer I could just click on the Dock icon or Alt+Tab over to Yammer and check in on the flow of messages.

2. A DOCK ICON WITH NOTIFICATIONS - Similarly, Yammer has its own icon in my "dock" on the bottom of my Mac's desktop where it can get a little red circle with the number of new messages in it. A visual indicator that I might want to go check it out.

3. A SIMPLE, COMPACT WINDOW - As the user Rob Sparre pointed out above, the Yammer Desktop client provides a nice easy way to keep track of the feed and interact with messages there. Simple. Easy.

Now judging from other comments I'm guessing that keeping up another desktop client - and one based on rival Adobe Systems' AIR technology, at that - was too much effort for the current staffing level that Microsoft has for Yammer developers.

I understand. You have to prioritize and part of that involves looking at what you remove. I get that. I'm a long-time Apple user... I'm used to having functionality stripped away. :-)

Yes, there are the mobile apps for iPhone, iPad and Android... but the thing is that when I most post to Yammer it is when I am on my work computers... NOT when I am mobile. I often want to share links to things I am working on or articles I find interesting. I'm not going to switch to a mobile device to do that!

So as of tomorrow I don't expect I'll be using Yammer nearly as much as I have been. Sure, I can login to the bloated, Facebook-like web interface... and sure, I can bookmark it or make a pinned tab or something like this... but as I said, Yammer was already "yet-another-place-to-check". The app just made that easier. 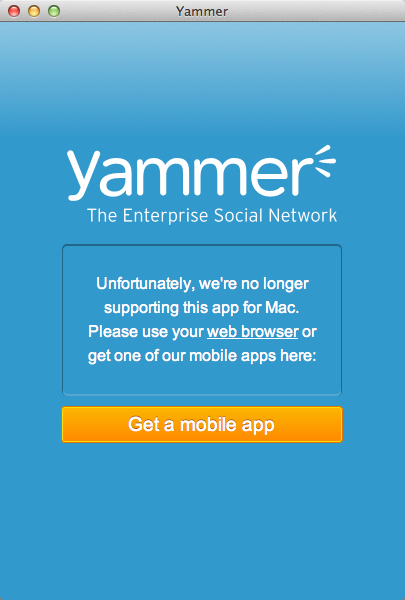