Hypervoice – The Fundamental Flaw In The Proposal 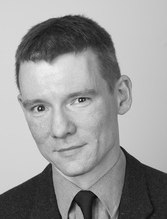 I am a huge fan of Martin Geddes, but he and I disagree fundamentally on one key part of what he is now calling "hypervoice".
NOTE: Today's VUC call at 12noon US Eastern will be with Martin discussing his ideas. If you'd like to weigh in on the issue, please join the call. (Unfortunately, I'll be waiting to board a plane home from Mumbai and can't make it... hence this blog post.)

To back up a bit, Martin has always been one of the "big thinkers" in realm of VoIP and telephony/telecom. Way back in mid-2000s when a number of us all started writing about VoIP, Martin's Telepocalypse blog was brilliant. He was always thinking about the "big picture" and drawing connections where they were not already apparent. His work with "Telco 2.0" was excellent and it was no surprise when he went to work for BT looking at their strategy. Now that he is back out on his own as a consultant, I'm a subscriber to his "Future of Communications" email newsletter (subscribe on the sidebar to his site) and enjoy reading his frequent issues.

Recently he gave a closing keynote presentation at the Metaswitch Forum titled "A presentation about Hypervoice" that is available via Slideshare or PDF.

The presentation itself is very well done. In typical Martin style it nicely lays out the history of both telecom and the web and brings them together to talk about what comes next.

I actually agree with almost all of what Martin writes. Much of what he talks about as "hypervoice" I see already happening in so many ways.

But here is where we fundamentally disagree... this slide early on: 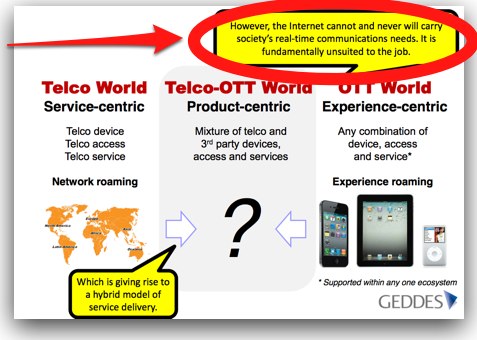 That includes the text:

"However, the Internet cannot and never will carry society's real-time communications needs. It is fundamentally unsuited to the job."

Martin's argument, which he has made multiple times before, including in a comment he wrote in response to my post about how WebRTC will disrupt real-time communications, is that the Internet as it exists today cannot provide the level of service that is truly needed for real-time communications. He believes we need to have different classes of service on the Internet and separate "flows" of communications. He comes back to this point later in his "Hypervoice" slide deck: 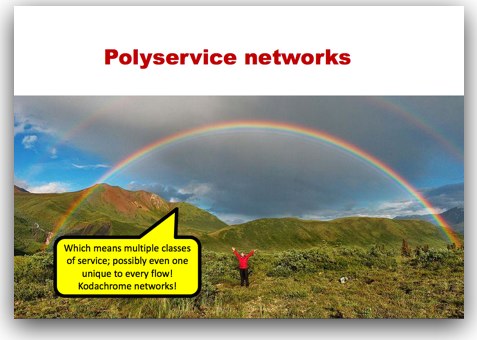 This is where he and I part ways. As I said in my own response to Martin's comment to my earlier post:

Martin, yes, I've read your newsletters on this point and while I understand the concern I'm not ready to say that the plain old Internet can't deal with the contention. Back in the early 2000's I was the product manager for Mitel's "remote teleworker" product and there was great concern from the traditional telecom folks within Mitel about this idea that we were going to put an IP phone out at some random point on the Internet where there was no QoS or anything. In fact, some folks wanted us to say that it had "cell-phone voice quality" so that we wouldn't set high expectations about voice quality. The reality was that through appropriate codecs, jitter buffers and other technologies the connections almost always worked and almost always had outstanding quality (usually FAR better than cellphones).

The other reality is that we've seen OTT providers like Skype and others providing excellent services that work the vast majority of the time. We're seeing new and improved codecs coming into the market. We're seeing new traffic shaping technologies. The list goes on...

If the (brief) history of the Internet has shown us anything, it is that the Internet's capacity to adapt and change is boundless. We'll see what happens in the time ahead.

And no, I haven't written off the telcos as having a role in real-time comms. I just don't know that the "role" they may have will necessarily be the one they would like to have! ;-)

I believe fundamentally that the "open" Internet can and will adapt to the needs of carrying real-time communications. I would argue that it already has in so many ways... and it will change even more as we continue to move more and more real-time comms onto the Internet, particularly with WebRTC and other emerging technology.

And yes, you might expect me to say this as a passionate advocate for an open Internet, but I firmly believe this:

We do NOT need separate layers of the Internet based on class of service.

That, to me, is a dangerous path. I want to continue to see an Internet where all nodes are treated equally ... and where real-time communications can work for all.

Martin and I will probably have to agree to disagree on this. It's doubtful he can convince me nor I can convince him.

What do you think? Do we need different layers of the Internet? Or can the Internet adapt without that? Leave a comment here... or join in to today's VUC call and comment there.