Being a huge fan of the git version control system, I was pleased to see that O’Reilly is offering 50% off on their git-related videos and ebook. I haven’t seen the videos, but the “Version Control with Git” book is quite good. More info on O’Reilly’s site:

P.S. I have no financial motivation to post this info, i.e. I am not being compensated through any kind of referral links or anything else. I just think this is an interesting offer to folks interested in learning more about git.

Are They Crazy? Digium Enters The Phone Game With Asterisk IP Phones 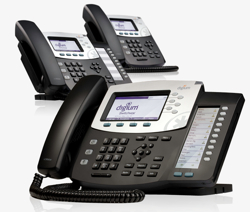 When I first saw the news today, my immediate reaction was:

Seriously? Digium is coming out with phones???

In a rather fascinating move in an already extremely crowded market, Digium announced today that they will be producing "Digium Phones", a new line of IP phones specifically targeted at users of Asterisk and Switchvox (both Digium products). They tout among the benefits:

There will be three models available:

The news release indicates they will be available in April and are currently on display at ITEXPO this week down in Miami. A datasheet is available

What is perhaps most interesting to me is the "app engine" included in the phone. From the news release:

Digium phones include an app engine with a simple yet powerful JavaScript API that lets programmers create custom apps that run on the phones. They aren’t simply XML pages; Digium phone apps can interface directly with core phone features.

Many IP phone vendors have tried various systems like this to let developers build more apps into the phone with varying degrees of success. What makes Digium different, though, is that it comes from the developer community. The history of people working with Asterisk is the history of tinkering and hacking away on the systems. In fact, in the early days, that was all you could do. No fancy GUIs... just configuration files and cryptic APIs. As a result, Digium has a very strong developer community (they claim 80,000+ developers) who just may be able to make use of this new API.

What remains to be seen is what kind of applications you can really build with these phones - and how easy it is to install and or use these apps.

But are they crazy for entering the already insanely-crowded IP phone market? Particularly at a time when enterprise smartphone usage is increasing - and may often be the preferred communication medium? And when people are becoming increasingly comfortable with softphones, courtesy largely of Skype and "Unified Communications" desktop apps like Microsoft Lync and similar apps from Cisco, Avaya, Siemens, IBM and more?

I completely understand that Digium would want to make the Asterisk "user experience" much easier and simpler. Particularly as Digium continually seeks to move beyond their traditional more developer-centric audience into businesses and enterprises. Many of those folks want a system that "just works." If they can order a system from Cisco or Avaya that comes complete with the IP PBX, IP Phones, etc. and it all just works, they may choose that over a less-expensive but harder-to-put-together solution using Asterisk.

As these new Digium IP phones are "designed exclusively for Asterisk and Switchvox," they should remove that pain and make it much simpler to get an Asterisk solution up and running. (Side note: Does this "designed exclusively" phrase mean they won't work with other systems? Or just that they work better with Asterisk? UPDATE: Digium's Kevin Fleming answered in the comments - the phones are SIP phones that will work with any system for basic features.)

Still, the IP phone space is incredibly crowded. One vendor of VoIP products, VoIPSupply.com, lists 382 results for IP phones. A quick scan of that list will show you names like Polycom, Snom, Grandstream and Aastra, all of whom have been typical phones used with Asterisk-based systems. (As well as Cisco, Avaya and other more "traditional" telecom players.)

What will these new direct-from-Digium IP phones do to the relationships with those other IP phone vendors?

Much of Digium's early business was with PSTN gateway cards that you could install into your computer. With much of that market moving entirely over to SIP trunking or SIP-based gateways, is the IP phone line designed primarily to replace that fading revenue line? Or to simply provide another revenue source for the company - perhaps at the expense of partners?

And what is the state of the market for IP phones, anyway? Analyst firm Frost and Sullivan says the market for SIP phones will continue growing and NoJitter's Eric Krapf has reported that IP phone vendors are seeing strong growth.

Still, with the "consumerization of IT" and the "bring-your-own-device" movement as people want to use their iPhones, Android phones, iPads, tablets, etc., it seems a curious move to launch a brand new line of IP phones.

However, Digium - and Asterisk - hasn't gotten to where it is by following the conventional wisdom. If anyone can carry off the launch of a new IP phone line, they may be able to do it. It will certainly be interesting to see where this takes them.

I would never have thought I'd be writing about that.

What do you think? Crazy move? or smart?