Microsoft Buys Nokia – Was There Really Another Choice? 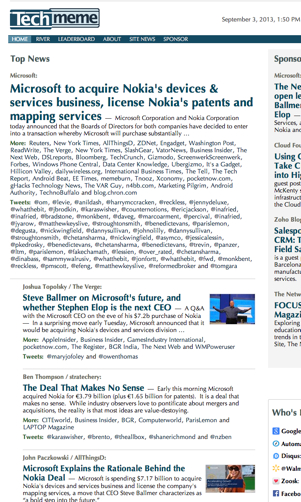 Microsoft accomplished something today they haven't done for a while (at least in my memory) - they dominated the main page of Techmeme and had a great amount of the tech media talking about them.

The news, of course, is of Microsoft's purchase of Nokia's Devices and Services business and licensing of Nokia's patents and mapping services.

Is anyone truly surprised by this?

Given those conditions, the marriage makes a certain amount of sense.

But... you only have to scroll down that Techmeme page (captured at 1:30pm US ET today) to realize how desperate a situation this is for both companies.

First, news is out that Apple is holding an event one week from today on September 10 where they are widely expected to announce new iPhones, including potentially a lower cost iPhone 5C. They are also expected to announce a release date for iOS 7 ... and who knows what else is in store.

Second, Google announced the next version 4.4 of the Android operating system, named "KitKat", along with a branding deal with Nestle, makers of the KitKat candy. The first link also points to a Google+ post from Google's Sundar Pichai where he states that over 1 billion Android devices have been activated.

Third, Amazon announced the 6th generation of their Kindle, and while it is not a phone, per se, it is a massively used mobile device. Amazon continues to learn and evolve their devices and has been rumored for years to be contemplating entering the smartphone space. Jeff Bezos thinks in the long term and so could easily be biding his time.

Microsoft and Nokia need each other, if for no other reason then they don't really have a choice. They bet on each other... and it doesn't seem to be working out so well. Their only hope is really the "synergy" or whatever other marketing buzzwords you want to apply to the merged entity.

I agree with much of what Om Malik wrote today, "Why I think the $7.2 billion Microsoft-Nokia deal is a terrible idea", largely for the reasons I wrote earlier... while Microsoft and Nokia work to make this deal happen - and then the actual integration - Apple, Google, Amazon and others will be rolling out the next versions of their massively successful mobile devices.

Microsoft's "Strategic Rationale" document lays out a glowing plan... let's see if they can execute on it - and whether it turns out to be too little, too late. I wouldn't completely count Microsoft out, as they do have great resources and capacity, but they are definitely far behind.

As a consumer, I definitely would like to have a third major ecosystem for mobile devices. The question is whether Microsoft/Nokia can emerge as that third ecosystem...

What do you think? Smart move? A yawn? Or the proverbial rearranging deck chairs on the Titanic?

P.S. The most entertaining take on today's news definitely has to be the "Dear MR NOKIA!" post written in the style of the emails probably all of us have received. :-)

An audio version of this post is available at:

Video Interview: Matt Larson on the Future of DNS and DNSSEC

What needs to be done to get DNSSEC further deployed? What is the future of DNSSEC and DNS in general?  At IETF 87 in Berlin we had a chance to sit down with Matt Larson, formerly of Verisign and now Chief Architect at Dyn. Matt shared his thoughts with us:

We appreciated Matt’s time and wish him all the best in his new role at Dyn.