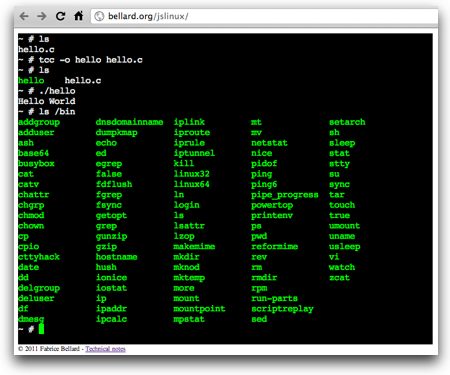 Fabrice Bellard explains why he wrote this JavaScript PC emulator.

My immediate thought was how this could be used for teaching people Linux. Regardless of what it is used for or whether it’s just a fun experiment, it’s very cool to see that JavaScript engines in the latest browsers can support this type of more complex activity. Kudos to Fabrice Bellard for writing this!

Use Node.js to Build Your Own SMS or IM Interface to Twitter

And would you like to do all this using Node.js?

Sure, Twitter already offers its own SMS interface… but hey, why not build your own to play with Node.js?

That’s exactly what my colleague Justin Dupree did and then wrote up in this great blog post:

I love it! I mean… combine 3 of my favorite passions: Twitter, Tropo and Node.js… mix them together, shake them a bit and out pops a very cool mashup that lets you have your own interface to Twitter using SMS or IM.

Kudos to Justin for the great way he walked through the code in the post… and also made the full Tropo-Node-Twitter code available on Github. I’m looking forward to playing with it more and seeing what else I can do with it…

While this video is from back in July 2009, it’s a great story around how JSON came to be and has some solid lessons in it for people developing new data formats:

Yahoo! thankfully provided a full transcript of the video on that page so that if you don’t have time to watch the video (I initially didn’t) you can simply scan down the text.

I enjoyed the emphasis on “less is more” and on the need to remove functionality to make it simpler. At one point Crockford says (taken from the transcript):

One of the key design goals behind JSON was minimalism. My idea was that the less we have to agree on in order to inter-operate, the more likely we’re going to be able to inter-operate well. If the interfaces are really simple, we can easily connect, and if the interfaces are really complicated, the likelihood that something’s going to go wrong goes way, way up. So I endeavored to make JSON as simple as possible.

He goes on at some length about XML, language design and much, much more. If you have 50 minutes to watch the video, it’s worth it. (Alternatively, the transcript is excellent.)

I have admittedly become a bit fascinated with Node.js lately. In part because it uses that most mundane of web programming languages, JavaScript… the language looked down upon by so many, but actually quite powerful with the right tools. In part because I’m intrigued by a event-driven I/O. And in part because it’s so trivial to get web services up and running (and yes, that is true of other frameworks as well).

If you’ve been interested in learning more about Node.js, this video may help you as it helped me:

One note: It’s from November 2009, which in web language terms that is quite old… and Node.js has evolved a bit from where it was in this video. For instance, the “tcp” module mentioned in an early demo is now the “net” module. (I found some good examples of current usage.)

Ultimately my goal is to experiment with the Tropo WebAPI library for Node.js to build voice, SMS and Twitter apps using Tropo.com. Right now, though… I’m just having fun learning a new way to program!